When he first left, she felt that she had been tossed overboard. Forced to swim against impossible currents. Paddling with one oar. Surely, she was gasping for air.  At best, she could tread water.

If she stood still too long, she could feel a nibbling at her feet. Those predators sent from the deep to test her willingness, her courage to face her darkest fear: Could she make it on her own?

Then as sudden as the tide turns with the pull of the moon, she discovered the means to propel herself through the fierce storm of waves and the deepest of  cold waters. With each stroke,  the oasis of a new beginning was within sight.

Weary and worn but never defeated, she arose from the surf. Transformed from her journey through the salty brine, she reached  the shore.  Gorgeous, with the countenance of both an Amazon warrior woman and delicate nymph, she turned and bade farewell to a life laden with lies and libel. Her new path a revolution, a revival and revelation. 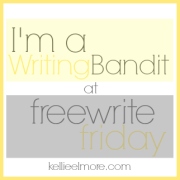 A Free Write Friday composed on a Sunday morning. Thanks to Kellie Elmore and all the other inspirational composers for their continued support!