Teenage curiosity and innocent lust are more apt descriptions from the summer of ’76.  A week at the lake with other families. Days when we never got out of our bathing suits until dinner. Dancing to the music of the Guess Who. Blown away by Peter Frampton. Wiffle ball games just before sunset. When darkness fell, the older folks gathered for their nightly card games while we put pennies in the pot for Michigan Rummy. One night the lights went out and I found myself kissing him. A cousin of a friend. And that’s all there was. A small crush that lasted less than a week. Vacation was over and we all went home. I’ve heard about him from time to time over the years. Turns out he lives in the same valley region as me. I understand he’s had similar struggles. I wonder if he has ever thought about that easy time when we knew nothing of the world. Still sheltered from the harshness and hard times.

But the one I that hides in a tiny corner of my heart happened three years later. Not quite summer and not yet fall. The freshman girl who a lot of the boys thought was cute (at least that’s what my friends told me at the time). But I fell for the senior and he for me. A bit of a rebel and I assure you that was part of his appeal. I liked his curly locks and trimmed beard and the fact that he could play guitar and sing. The first night he took me out he walked me to my dorm and we kissed on the path outside. His glasses fogged up. And I remember thinking that it felt so very different from it did when I was fifteen.

Needless to say, we fell in love. Crazy, mad young love where you find yourself unable to think of anything else. Love that didn’t meet parental approval, so it was met with outright rebellion. Circumstances eventually changed and then ended our ties to one another. My heart was broken. It was hard to let him go but it was the right thing to do. I thought I saw him once years after he’d married and I was with another. He was sitting at a storefront window talking with a friend. My heart stopped and my mouth went dry. I never went in to say hello. But his love letters and photos are still tucked away in an attic trunk. Momentos of my first love unread and unseen for decades. Pieces of a former self and sweet reminders of first love.

Kellie’s  prompt this week had me in the way back machine! I could not decide on one particular story as one memory (in this case, the latter) brought up another. The story is my complete thought process.

Summer is in the air and reminds me of those sweet summer flings, first kisses and young love. Do you remember? Tell me… 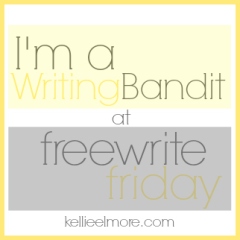