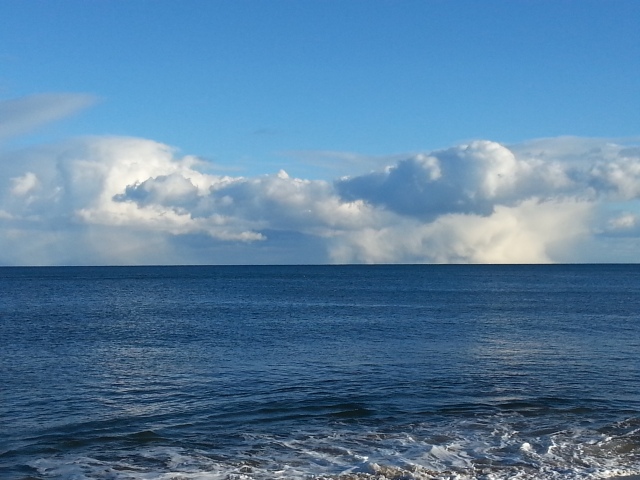 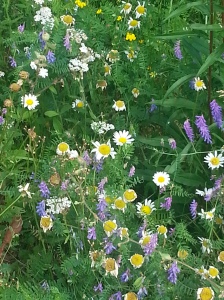 One of the many views taken from my phone

4 AM Sunday arrived quietly. I stepped out of the mudroom to feel the air and check the sky for stars and the waning moon. The day held promise – it was one we have been preparing for since my youngest son set it as a goal that long day in August  (Trails, Tales and Tails ).

I had been obsessively checking the forecast for Mount Lafayette all week. If the weather looked too dismal, the hike would need to be postponed. Any mountain above treeline becomes treacherous in bad weather. Caution and common sense must prevail. Lucky for us, it would be a decent day, albeit colder than the other hikes. No shorts nor short sleeves for this one!

Emily would join us once again and, after a quick stop for more coffee, we picked her up. Her first words after “Good morning” were  “I have some  Oktober Fest beers-do you want me to get them?” HA!  Great minds think alike.We had already put three Shiner Bocks in the cooler, a welcome reward awaiting us after a rigorous day!

It is hard to believe that in less than two hours we arrived in the notch. Hat and gloves and a third top layer were added to the ensemble before commencing the trail. Already the parking lot was crowded; we were lucky to find a spot. The summit was not yet visible; shrouded in clouds and a fog that we hoped would burn off by the time we neared the top.

Within minutes of walking, we shed the layers that we donned in the parking lot; the woods offering an insulating protection from the cold. Like our last excursion, we had plenty of company. Families, couples and many Canadians from Quebec out for a Thanksgiving challenge!

When you hike long enough with others you know, a natural pace and rhythm evolves. And as one hikes in this region, you come to expect tree roots and boulders to mark the path.You relax into one another and the pursuit before you. Time is suspended and you become wholly present. (I had been up this mountain long ago with my parents, brother and others. But the time and my age escape me.More than a lifetime ago – so much so that it feels like the first time today.)

There are three ways to climb this beast; all the trails offering their own special gifts and challenges. I decided on Old Bridle path as it was the shortest route (7.6 or so in all) with 3490 feet in vertical. The summit rests at 5220 feet.

The views were stunning as well as spectacular along the way, causing us to naturally pause and soak it all in:

( This photo from my phone does not do it justice of course but you get the idea!)

Per usual, we encountered the unexpected. As we were rounding a turn in the path, we paused to let two hikers descend. As we resumed, I mouthed to my son: “That looks like so and so.” Then from around the bend came Sue! Sue and her son are old neighbors of ours who moved a couple of years back. Her son and mine were inseparable playmates for years but personal circumstances affected their relationship. We stopped for a long few minutes, attempting to catch up (they had spent the night with her brother, the first hiker,  in the hut after hiking over the ridge the previous day). Such a bittersweet encounter. My son was thrilled that he finally ran into someone he knew. But later on the drive home, he  would remark of how shocked he was to see his old friend, how he forgot to ask after him and how it really sucked that their relationship changed.

Onward we marched, remarking of how much easier the hike was before we saw the layers upon layers of granite stones before us.  The heart takes on a different beat while hiking these spots. Fervent and strong rat-a-tat-tats, reminders of being alive!

We reached Greenleaf Hut-an alpine respite for many.

(This is not what it looked like yesterday at the time we were there!)

The weather changed  here in a significant way.Crowded and noisy with preparation for what lay ahead. A summit that was socked in and strong winds of frigid air. We stopped to capture some of nature’s new sights and then continued forward. 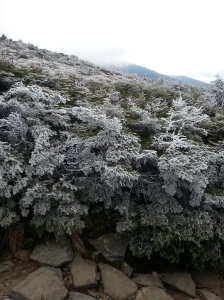 View of Eagle Lake from the northeast side of the hut

Lafayette is a tricky mountain. Besides the weather, the summit seems just out of reach with just a mile or so to go.  But in fact it is the part beyond Greenleaf that it truly the longest and roughest stretch. They say this hike requires stamina and I would agree with that description! You may be physically fit and fueled, but the mental fatigue can get the best of you if you let it. Or you can take a page out of my son’s book and literally dance in celebration of the experience. What a sight! 6’4″+ of fully body exuberance! Joyful and thrilled at the fact that he had never experienced this before. A view of the summit was impossible but we could see lines of hikers making their descent. A human path. The cairns became towers and my son added his own piece to one, marking his climbing territory. As if to say “I AM HERE.”

We forced ourselves to stop for water. Arctic sips necessary for the remainder of the ascent even though we did not feel one bit thirsty. We stopped to strike a pose for my son:

The winds were blowing around us and the sun was battling to be seen as we reached the top. ( I have photos but wish to protect the privacy of my boy). We debated eating because of the temperature but we were starving, so we took shelter behind a small slab of rock. The place was alive with French chatter and thru hikers talking shop who had emerged from an unseen path via Franconia Ridge. The clouds parted briefly and a loud cheer went up as we celebrated and clung to its heat. We felt uncomfortable sitting in our cold sweat, a dichotomous bodily experience that only movement would alleviate!

Emily and I share an aversion to descents. We find them harder because we fear placing our feet on the wrong rock and going ass over teakettle. We move like turtles as we watch others jump and run like mountain goats. My son is one of those. He relieves me of my stick and encourages me to use my arms for balance and tells me not to worry about falling. Emily and I stop to let others pass. This helps me get a better grip mentally. We reach the hut once again and Emily makes a pit stop. The place is even more lively than before as the sun has finally won out over the wind. It is here that we see the summit:

And lovely Eagle Lake once again:

As we reorganize our minds, bodies and spirits for the remaining 2.9 miles, I take in the raw majesty of Lafayette, its environs and its ever changing moods. I sigh, prepare myself and reckon that I must make the most of the rest of the day. And I surprise myself. I get better at my landings and when faced with slick slabs, choose the ass sliding option (coined by Emily!).  We make sure to stop at the outcroppings which offer us endless greens and oranges, an overall rich golden hue and views to infinity.

The rushing sound of  a wide-flowing stream signals we are near the end of our experience. My quads ache and Emily’s feet throb but we have enough energy to harmoniously shout a loud “WHOOP!” in the underpass that leads to the car. The packs are dropped as we open the trunk and cooler for a long cold one. The seven hour and forty-five minute hike ends with a  toast to another memory made. We remove our boots and hit the road for the drive home. The notch road is lined with cars. We saw them from the heights of the mountain. Many of them are like us. Longing for an escape. A few hours away from the troubles and annoyances of everyday life.  We journeyed into what truly matters. Time with Creation and with each other.