As I write this, thousands of Evangelical Church leaders (at the urging of #45), are encouraging their members to get out and vote in November. This is part of a larger campaign that involves millions of dollars in spending through the use of social media, phone calls, mail, and e-mails, and the  so-called micro-targeting of voters: a planned total of 1.2 million people in all.

The spheres of religion and politics  are now fully merged in this country.  It has taken decades of organized planning-both overt and covert-that has brought us to this moment in America.  The movement began in the late 70’s as a reaction to racial integration and mid-twentieth century feminism. Let us not forget that Jerry Falwell  began his movement when he founded an all white Christian school -Lynchburg Christian Academy- as a response to forced racial integration. He touted racial segregation as biblically based. Since that time, we have at least two generations of evangelical citizens raised up and hard-wired for religion, most especially through the growth of private Christian schools and their related churches who are free to espouse and require an adherence to a particular doctrine and dogma of Christianity. As a result, the Religious Right has grown into a powerful political force intent on creating a Conservative Christian Fascist Theocracy under the thinly veiled disguises of religious freedom and a “pro-life” stance (which, by the way, is fairly new to Conservative Christians, who until Paul Weyrich had the idea, were decidedly pro-choice and quite uninterested in politics in general). To arrive at the present moment, the movement’s leaders have had  to strike a Faustian Bargain, beginning with Ronald Reagan’s election right up to the current occupant in the White House. Neither one of these men were and are particularly religious people. But they were and are willing to appease this particular constituency in order to secure their power. In fact, the current administration’s Cabinet is stacked with many Conservative Christians who are changing and implementing all sorts of policies designed to benefit and satisfy big corporations as well as their xenophobic, homophobic and misogynistic base. In fact, I would argue that Evangelical leaders, their members and the current White House occupant are engaged in their own Devil’s Triangle, with the members serving at the behest and pleasure of both. The movement’s influence has had an effect on all levels of government; it is no coincidence that many state legislatures are now chock full of far right conservatives. Nor is serendipitous that much of our current Congress is caught in this same stranglehold. Their path to power has been paved by stoking the fears of false persecution and victimization, voter suppression,  and good old-fashioned gerrymandering.

So, here we are once again at another critical moment; we have had may weeks of them since January 20th, 2017! Right now, I believe that we have reached a breaking point where more than half of our citizens’ rights are at stake.  Like millions, I witnessed the Kavanaugh hearings last week. I watched as the usual big mouths from the Republican side used a woman to ask another woman questions out of false deference to Dr. Blasey-Ford’s terror about appearing in front of such a powerful body of white privileged men. Then I watch them shut the former down as soon as she got close enough to a possible crack in Kavanaugh’s calendar of events. Prior to that, I watched Kavanaugh unleash a vast amount of unchecked anger on unfounded conspiracies that he claimed were bent on derailing his nomination. As I watched, it became clear to me that this man has never had any of actions questioned. Up until this moment, he probably lived a life of elitist ease, working hard to climb higher on his social and career ladder but never suffering any real consequences for his escapades. Kavanaugh openly displayed what can only be described as adolescent aggression often attributed to teenage boys who are trying to squeeze their way out of a lie or a seriously damaging situation. He was unwilling to help himself or any of the committee members get to even a kernel of truth (which he also did at his previous hearings, evading questions about himself or policy or any precedents set by previous Supreme Court decisions). And this is why I found him to be so unbelievable. That, and the fact that he was aided and abetted by many of the 11 Republican’s ridiculous pontifications-as if he were the victim here.

By putting Kavanaugh after Dr. Blasey-Ford, he got the last and loudest word. Of course, if Dr. Blasey-Ford was as belligerent and petulant as he, we would have been having an entirely different conversation. And this brings me to another point. Imagine if all women spoke up at the time of their harassment, molestation or assault. Suppose they came at us with all the venom that Kavanaugh displayed? What would we do?

Women don’t speak up because we have been rendered powerless and because we are wrongly judged. We all remember Anita Hill and how she was treated. Some of us remember how we have been treated when we have come forward and then wish we hadn’t. When a graduate school friend of mine accused her landlord of rape, the first question the police asked her was “How many beers did you have that night?” The guy assaulted her in her own bed while she was sleeping after he gained entry into her apartment!

I cannot begin to tell you how many stories I have heard from friends and loved ones about their own sexual and physical abuse at the hands of someone they know. Not one of them came forward. Call it whatever you want. Fear. Shock. Shame. Self-Blame. Why? Because this is the culture in which we raise girls.  You are either Eve or Mary. Temptress or Perpetual Virgin. Which brings me back to the Evangelical Movement. In their culture, women are considered sexual threats to men. They are raised to be the gatekeepers of men’s sexual weaknesses and are also taught to keep themselves pure until they are married. This involves all forms of sexual expression, not just intercourse. Men are taught that their wives are there to serve at their pleasure and to procreate. (For more on this, I suggest reading Linda Kay Klein’s book, “Pure: Inside the Evangelical Movement That Shamed a Generation of Young Women and How I Broke Free.”)

And this is why the movement wants to outlaw abortion. They want women to serve as vessels for the next generation regardless of the circumstances or health risks to themselves. They want to limit access to birth control too (remember the Hobby Lobby decision?). When women cannot control their fertility, they have no autonomy. They are not free to pursue their own interests and desires. They are forced to control and suppress their sexual expression out of fear of pregnancy.  Thus, they are viewed as “virginal” except when someone wants them pregnant or to use them for their own pleasure. This unholy trinity of purity, pleasure and pregnancy is totally out of bounds when it comes to embracing the faith that was founded in Jesus’ name.  Perhaps for some Christians, it is only about his death on the cross and his sacrifice for our sins. From this, all doctrine springs forth and controls the behavior of the faithful from birth until death. I myself believe it is bigger than that. I worry less about being a sinner and more about being a giver and doing some good in the world. I believe that Jesus had a big tent. He was radically inclusive and spoke truth to power and he would be mortified at what some are doing in his name.

We forget that women had to “bust their butts” in order to get laws passed that allowed them to become more fuller citizens. We have had the right to vote for less than 100 years and it only came after many significant battles, including arrests, jail time and yes, rape! The Civil Rights Act allowed for more work place protections and opportunities. Title IX allowed for more equity in all areas of education and athletics (although Betsy Devos is attempting to undermine this in regards to sexual assault, of course!). Women can now apply for a credit card and loan without the consent of or co-signing by a man.  Wives can be victims of rape by their husbands. It is illegal to beat and batter your spouse.  Access to birth control has come as a result of a Supreme Court decision (Griswold v. Connecticut). All of this is at risk because of  the restrictive cultural and religious beliefs of a few.

When you want to rule all of your citizens in an authoritarian manner, you start with the women. During his reign, Hitler outlawed abortion (with the exception being if the father or mother was Jewish). One of the slogans during that era  was: “Kinder, Kuche,  Kirche” or Children, Kitchen, Church.  Sound familiar? 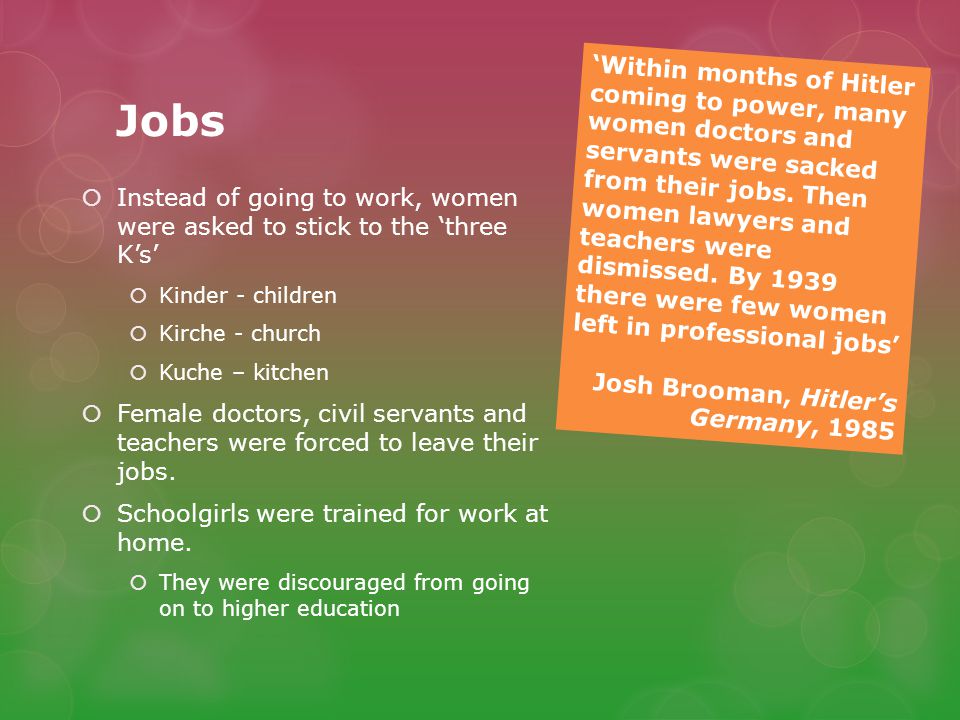